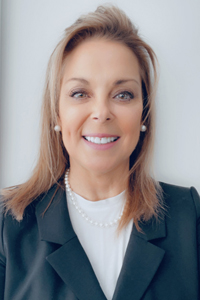 Andrea moved to Henderson in March 1994 after graduating with a B.S. in Business Administration from Murray State University and marrying her husband, Corey. Corey moved the family all around the U.S. with his job with Brenntag, landing them back and forth to Henderson three times in 27 years for a total of 16 years of residency in Henderson. Their final move back to the community was their last and Henderson has now become their permanent home.

Andrea says she was blessed with the opportunity to stay at home with their two kids: son Dalton and daughter Abbey. Meanwhile, she has run a small business, A-Fit Training  — a private studio that mentors women of all shapes, size and age, with a specialty in promotes overall health, wellness and self love — as a personal trainer and wellness coach for more than 20 years.

Andrea’s need to mentor and give back grew stronger as she became an empty nester. She found that the Partnership of Women (POW!) was a wonderful way to learn about all the types of non-profits in Henderson.

During the past several years, she has been the Grants Chair, Co-Chair and now the acting Chair of the Partnership of Women. Andrea says she is happy to say that she is now a part of the Community Foundation of Henderson and all it has to offer our community.